Let's be honest.  Riding on a moving and perhaps unpredictable animal through a habitat that is filled with other moving and unpredictable animals, some of which can eat you, others which can stomp on you and the odd one that might bite you, may not seem to some like the most sensible idea.  Frankly, my crazy younger days of taking serious and sometimes stupid risks are well and truly behind me.  I m a mother of two small boys and I can't afford to die.  My safari guests are often my friends and I don't want anyone getting hurt.  No way.  Not on my watch.

But the fact is, in our comfortable, risk-free, digitally-controlled lives, it s only by taking the odd risk and fully ensconsing in nature that you can remind yourself how good it is to be alive.  This has always been a big part of my love for Africa, that sense that you only get in the wild lands of the bush, of knowing that you are not in control of everything, that there is a bigger picture, that nature is actually in charge, and that out there, in the place of claw and tooth and wrinkled skins, we apparently advance primates are nothing more than prey. 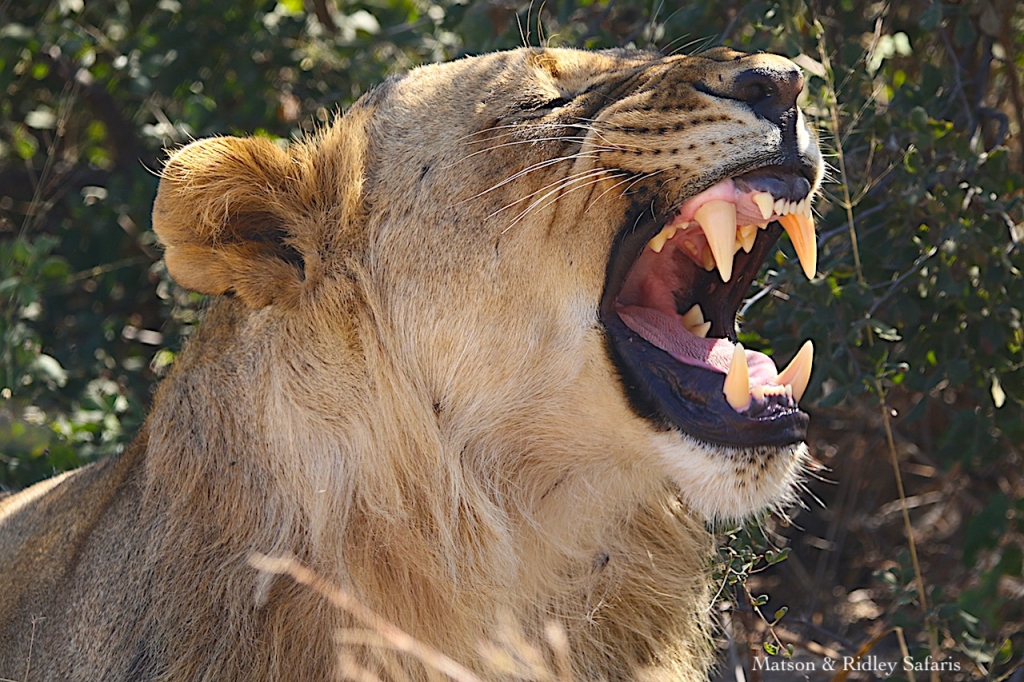 When we arrived at Macatoo Camp, the base of African Horseback Safaris, the manager made it extremely clear that no one who wasn't able to gallop away from a situation was going to be allowed to ride.  The safety of riders is something they take very seriously, so if you can't confidently ride, there s no way they're putting you on a horse out there in lion country.  That is extremely reassuring, unless of course, youre thinking what most of us were during this orientation conversation, that I might be a decent rider in my own countryside, but how will I react in a situation where we come upon lions?  How will my horse react?  So I raised this question with the manager, and she readily replied that their policy is to avoid lions, to retreat if the riders should come upon them, but it wasn't the horses reactions that they worried about - it was ours.  We were at all times to follow the instructions of our guide.  The guides seemed pretty confident about the obedience levels of their horses, but you still can't help wondering whether basic animal instincts kick in if confronted with the bared teeth of a charging lioness.  After all, aren't horses just pretty much plain coloured zebras? 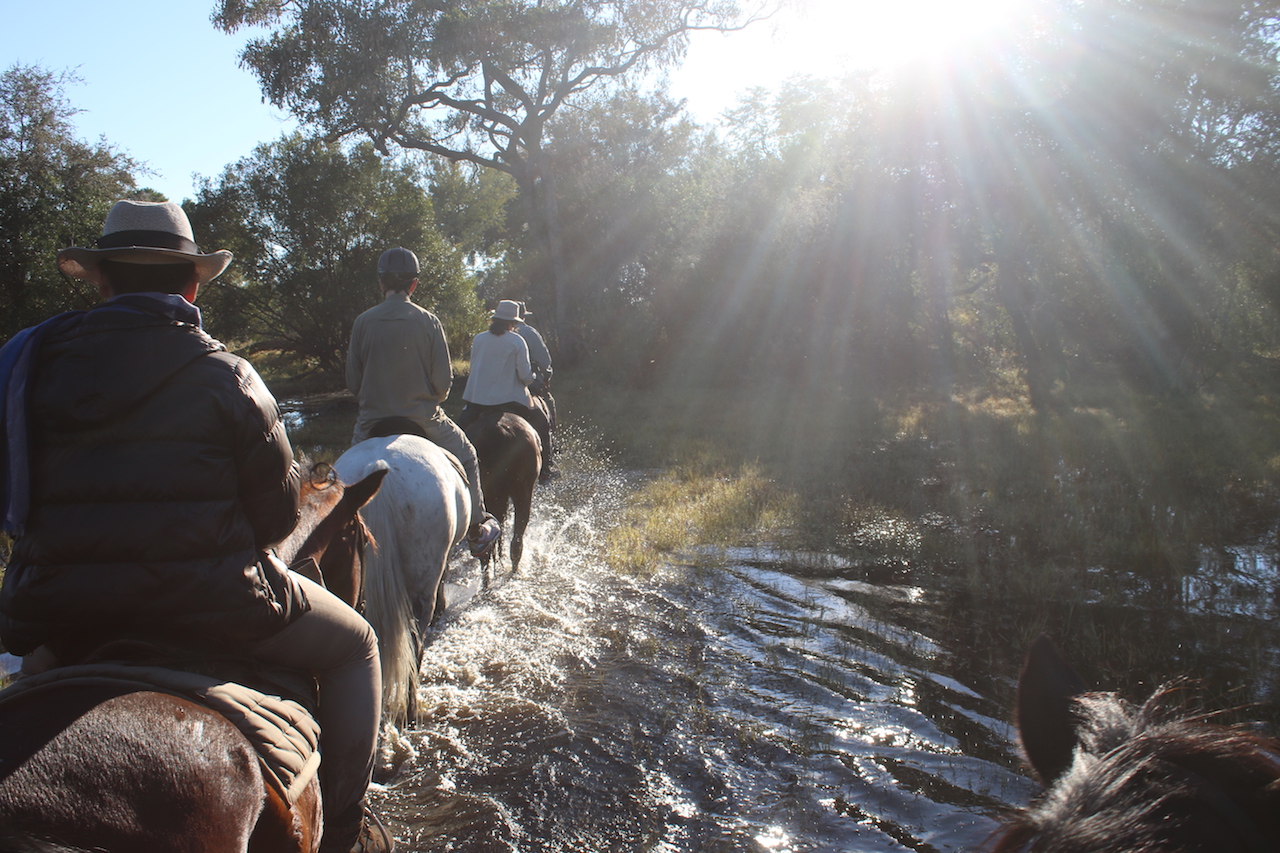 These questions were swirling around my mind as I mounted my African steed for my first ride, with the assistance of a step and local stable hand, my Canon SLR wrapped across my chest.  I reminded myself about all the years of mustering cattle I'd done on horse back on our family farm in southeast Queensland, and the preparatory re-training I'd done in the past few months to get back in to horse riding shape, to give myself a last minute confidence boost.  And then we were off, with our guide Bongwe in front leading, and the rest of us trailing behind.

All thoughts of becoming lion food went out the door as the horses trod through the Okavango Delta as though we were part of their herd, taking us through up to thigh deep water, across custard-coloured grasslands, through picturesque woodlands while red lechwe herds watched us unperturbed.  With one of my groups, we were literally just a few metres away from a spotted hyeana at a den, who simply watched us but did nt even get up.  We watched warthogs and kudus, reedbucks and giraffes with babies, from much closer than you'd get to them in a vehicle.  It was so peaceful out there that we actually came upon a sleeping elephant bull.  Lying on his side, only a tusk sticking up to show that he was there, he was actually snoring under a tree.  No kidding!  What was most incredible was the reaction of the animals as we moved through their habitat and it was a totally different experience to being in an open vehicle.  On horseback, it was like we humans were just another herd of impalas, completely non-threatening.  They simply ignored us.  The other amazing thing about game viewing on horse back was that you don't have the engine noise of a vehicle.  Until hybrid 4x4s become a reality in the bush, this is something youre stuck with on a normal game drive - the background noise of a diesel engine.  On horseback, you hear everything from the birdsound to the leaves moving and lizards rustling in the grass.  It s a complete nature immersion, the kind of fix I've only otherwise experienced when walking in the bush (but on horses you cover much more territory than walking so you see more).

So the question youre wondering - did we ride into lions after all that build up?  Well, no.  We heard them pretty much every night, and my second group had a lovely sighting of a new pride that had moved into the area, but I m very pleased to say we did nt see any lions on horse back.  On one occassion one of my groups did have to get out of the way of a grumpy Cape Buffalo bull who was catching up with a herd of about 300 of his friends (we were in between), and a couple of ladies on one ride did get close to a leopard and young one, as well as a black mamba.   But remember, this is the Okavango Delta.  There s no fences between you and the animals.  You hear the elephant bull as his stomach rumbles right beside your tent at night.  You hear him shaking the palm tree to get the sweet fruits near your tent.  You will go to sleep while spotted hyaenas cackle and lions hurrumph.  There may be a Cape Buffalo on the track as you walk to breakfast in the morning, his feet overlapping the fresh tracks of a leopard that walked through the night before.  And you will wake up every day so incredibly excited to see what that day brings! 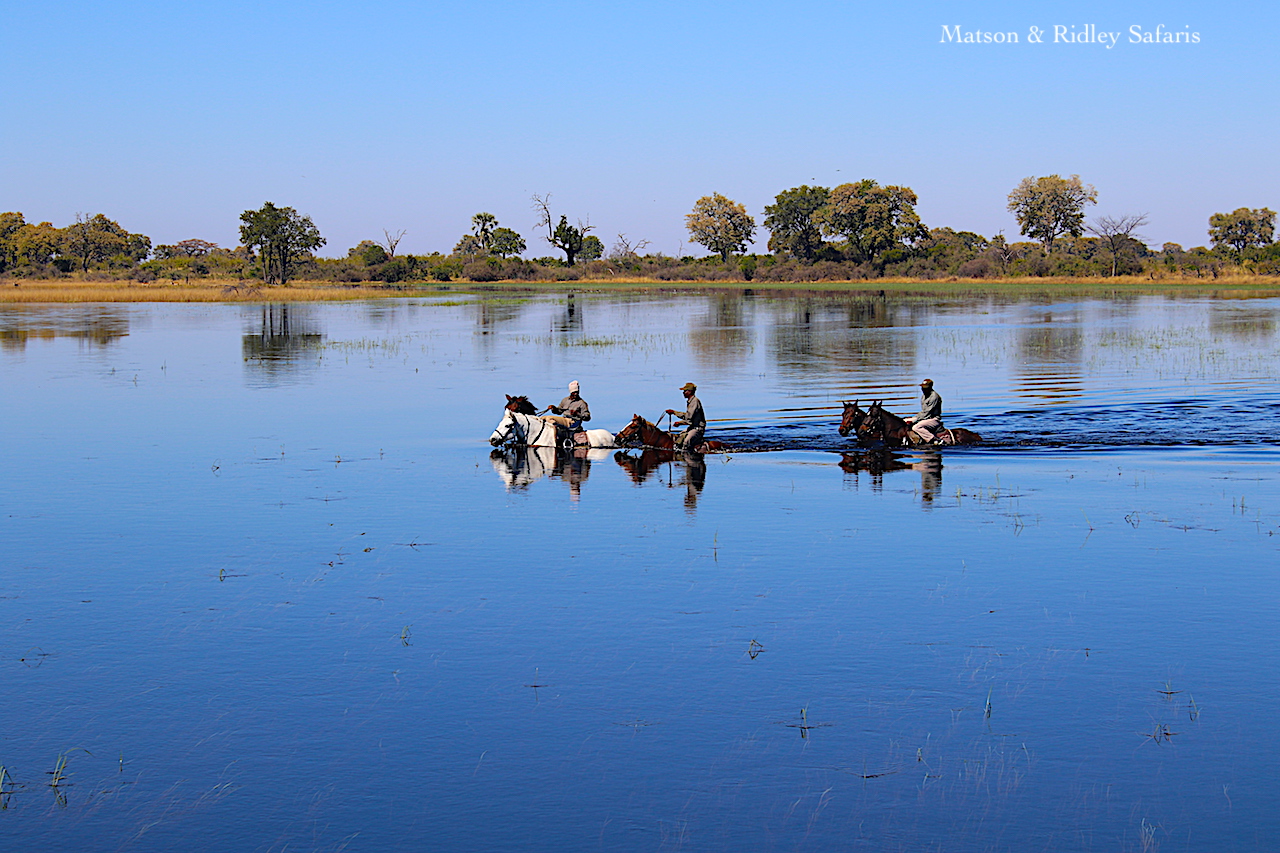 The wilderness experience you get in Botswana is second to none.  You don't get the very high density of wildlife that you might see in the Masai Mara and Serengeti, but you do get the whole place to yourself, or at least it feels like it.  You're unlikely to see another tourist vehicle during your stay at the camps we visit on our safaris.  So if exclusivity and a true sense of the wilderness is what you love, Botswana is hard to beat. 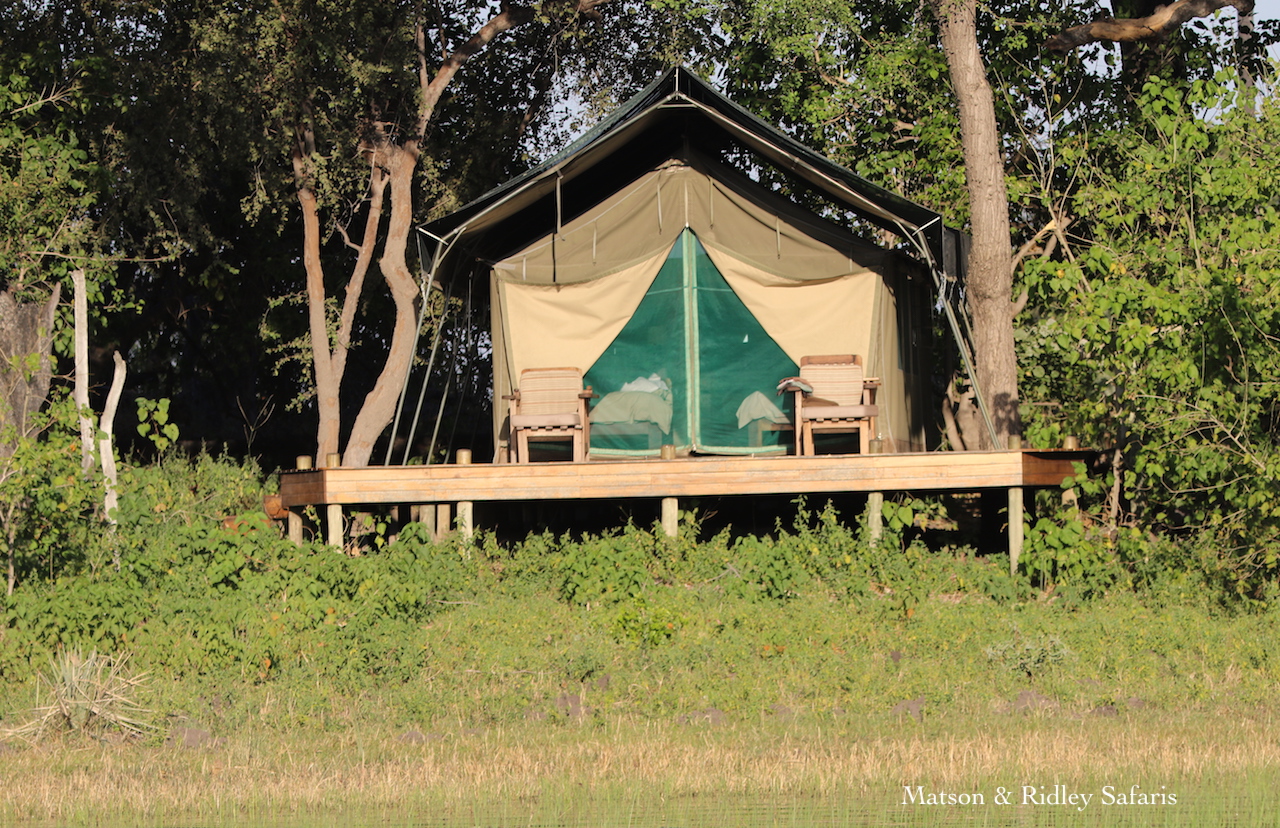 If youre looking for a different kind of safari, and youre a confident rider, there s few better ways to experience the wild than on the back of a horse.  The horses at Macatoo had more get up and go than horses I've ridden in Australia (might have something to do with living in a place full of things that eat horses), but they're also far more receptive to even the slightest movement of the reins, and I felt more confident on a horse there than I ever did mustering cattle on our farm (more to do with competence levels of the Macatoo horses than my own).  Horse riding safaris are available all over Africa and we've got the scoop on the good ones that give back.  Contact us for more information on reputable operators and to book your next adventure.  Thanks to the very professional team at Macatoo for taking such good care of my safari groups this year. 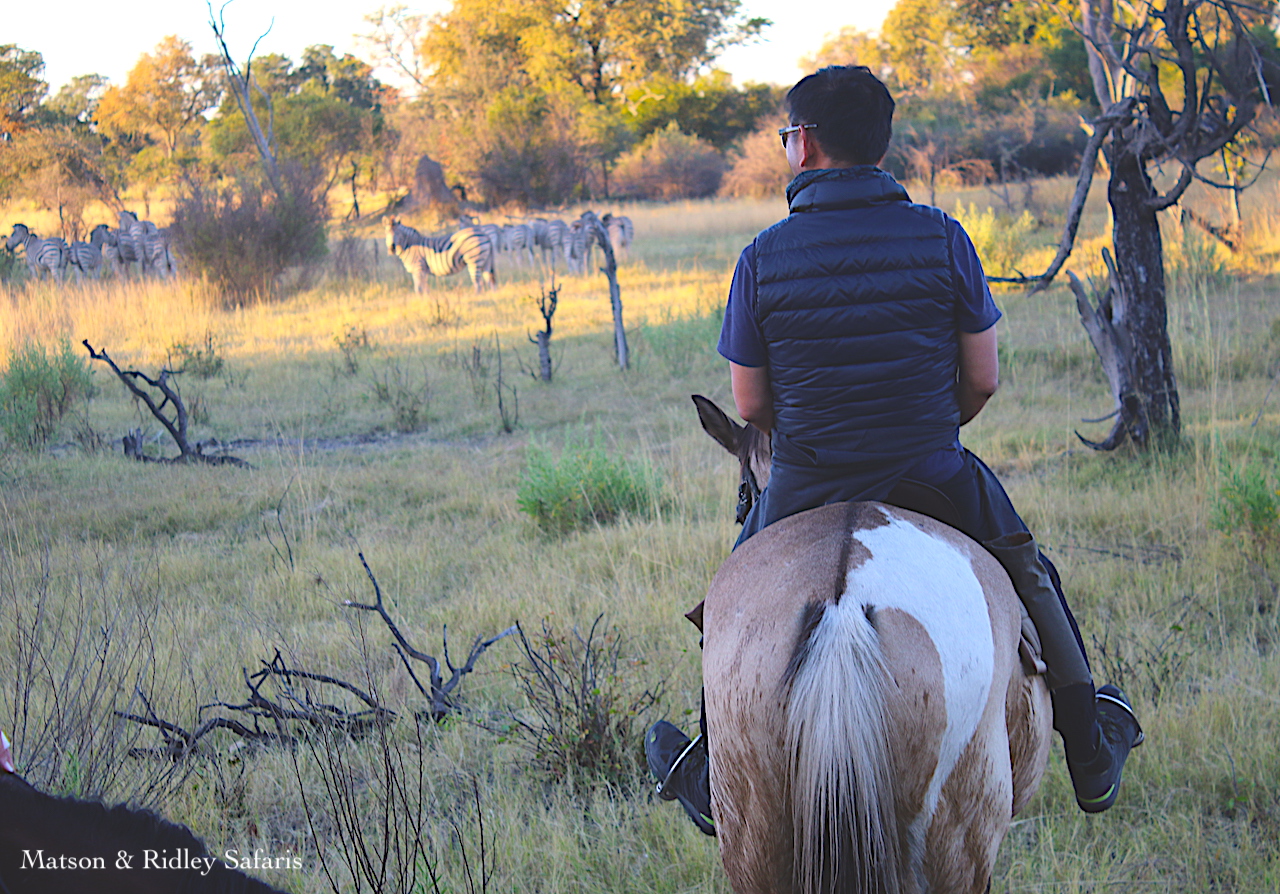