I've long admired the work of conservation organisation, African Parks, because what they do works.  They're not all talk when it comes to real wildlife conservation.  Where they take over the management of parks, like Zakouma National Park, Chad, we've seen real conservation outcomes, meaning the poaching virtually disappears and wildlife numbers swiftly pick up. They also focus on local communities bordering these parks, looking for ways to help them benefit from the wildlife, but the big impact they make is they create jobs.  In the Central African Republic, where African Parks manages Chinko National Park, home to the rare central African lion, they are the biggest employer of local people outside the capital, and the largest tax payer in the country!  Jobs means local benefits from the wildlife and especially in countries that few tourists visit, this is vital for conservation. 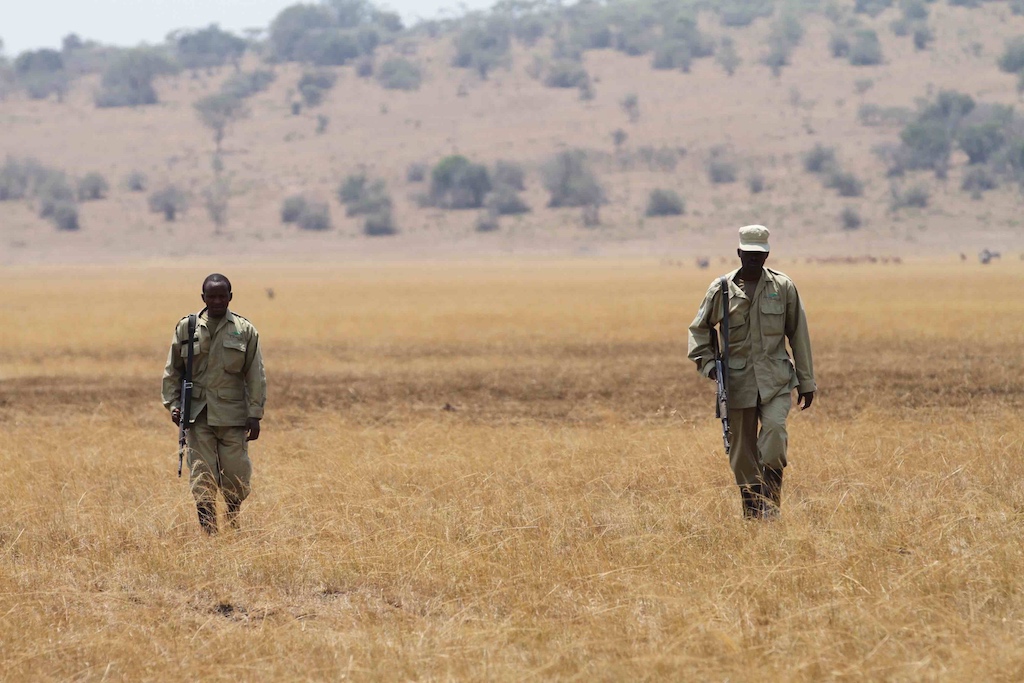 I've been wanting to visit an African Parks project for some time, so after my last gorilla trekking expedition to Rwanda I headed over to Akagera National Park, on the eastern side of the country bordering Tanzania (the gorillas are in the west bordering the Congo).  In one day I basically drove from one side of Rwanda to the other, which isn't that hard, only about 5 hours driving - it's not a big country by African standards!  Akagera is about 2.5 hours drive from the capital, Kigali. 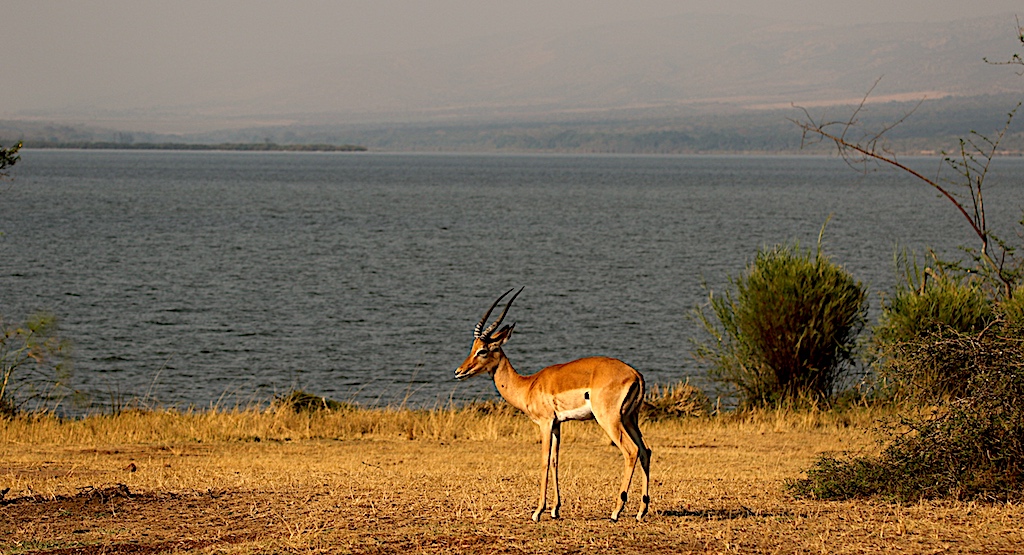 You've heard me raving about Rwanda lately, after my two visits to the gorillas this year, but Rwanda is also the home to a little known park that feels completely undiscovered, which is a welcome change after the crowds of peak season in the more famous East Africa parks.  Akagera is central Africa's largest protected wetland, a place of savannahs and gigantic lakes, and it is Rwanda's only Big Five reserve.  It's also a massive conservation project, as the park has had its ups and downs over the years, taking a particular toll during the genocide when people moved into the area.

Photo: Waterbuck antelopes in an area that had recently been burned and now sprouting fresh green grass. T. Matson.

This year, African Parks reintroduced black rhinos.  The last one was seen in 2007.  Two years ago in 2015 they also introduced lions, after they were hunted out in the 1990s.  I spent a day driving around the park and while you don't see the high game concentrations that you do in say the Masai Mara, you also don't see any other tourist vehicles and there's more than enough hippos, impalas, warthogs and more to keep a wildlife buff like me perfectly happy.  I also saw a herd of roan antelope, which is something you don't see every day! 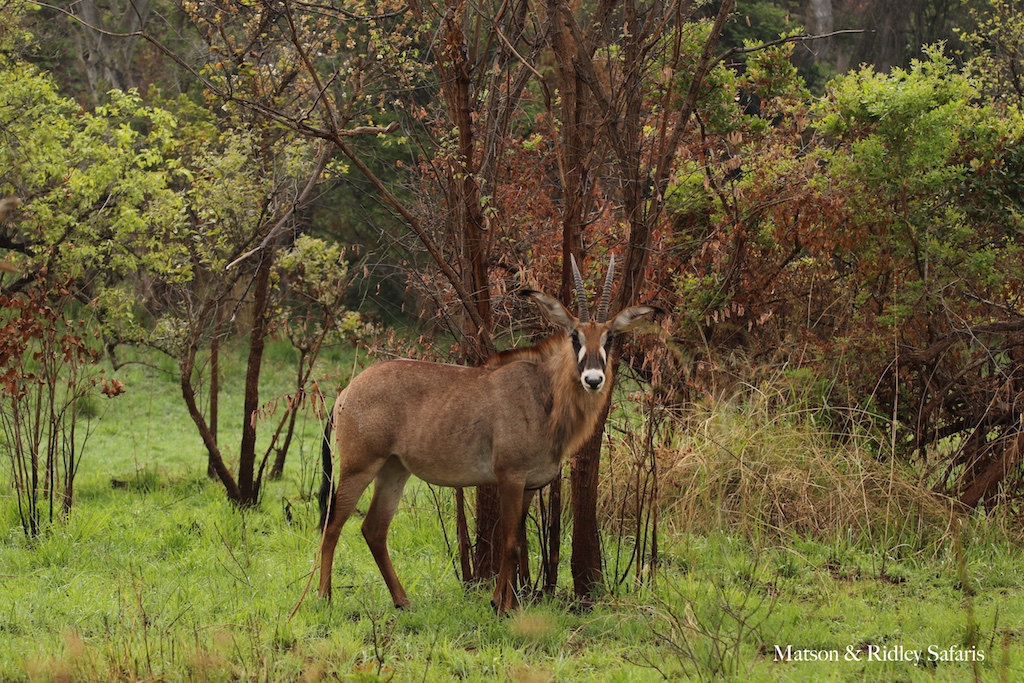 Ruzizi Tented Lodge is the main tourist camp in southern Akagera and it's a good mid range tented camp with lovely views of the lake and a stunning dining deck.  Vervet monkeys leap around while you have breakfast and the dawn light turns the water pastel pink as you listen to the wake up sounds of hippos and multitudes of birds.  African Parks, operating in partnership with the Rwandan Development Board as the Akagera Management Company, offers a number of activities with local guides, including boat rides on the lake (great for birding, but also for hippo and croc lovers, and we did see Cape Buffalo too), behind the scenes tours of African Parks headquarters, night drives and community visits.  Ruzizi doesn't come with the top end price tag either because it's not luxurious, so it's a nice add on for not much more money. Plus all the profits go to the management of the park!  It's probably not the kind of place you want to visit if you want those classic money shots of wildlife (head to the Serengeti for these!).  Akagera is more for people wanting peace and quiet away from the crowds, who don't need luxury, but just want to be in nature and know that they are helping conservation.  Birders will love this place! 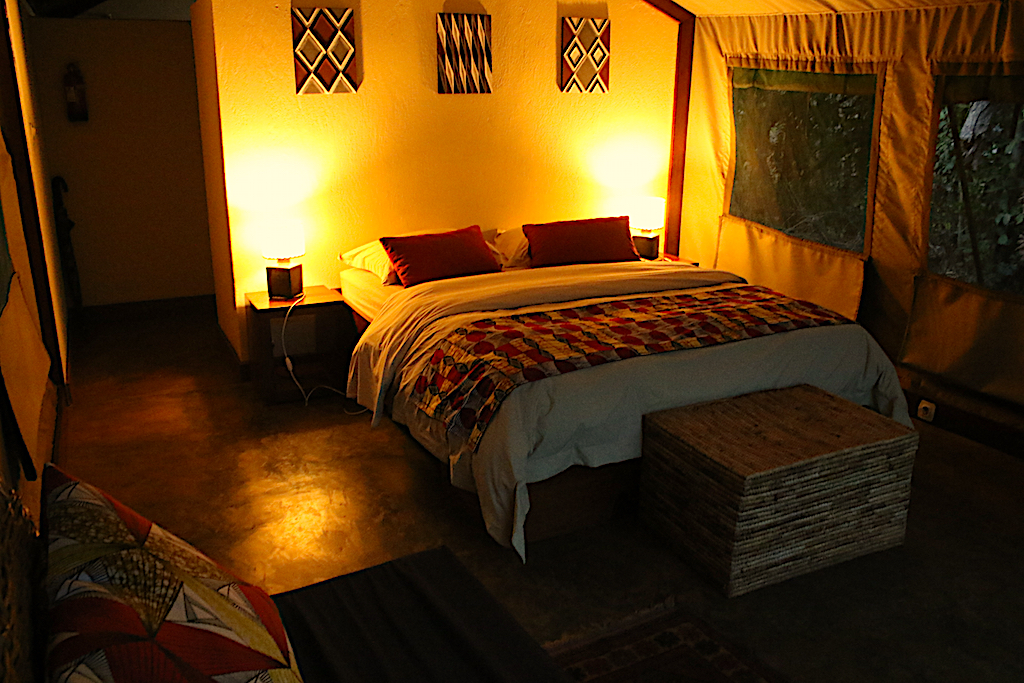 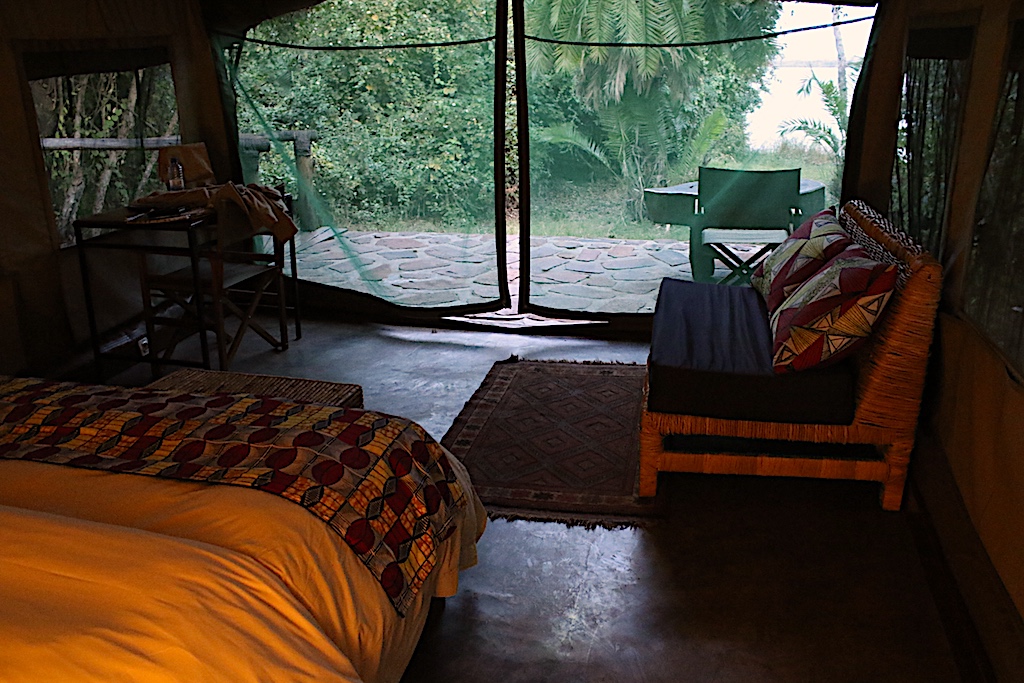 Akagera is also home to a population of around 100 elephants, that were introduced in 1975, then orphans of a cull in another part of Rwanda.  There were only 26 of them and they were all under the age of 10 years when brought in.  A bull that survived from this introduction called Mutware is now a local legend, and one to watch out for as he can be aggressive depending on his mood!  I wasn't fortunate to see any elephants on my day in the park, as the local guides told me the breeding herds were in the north of the park, too far for us to drive to in a day.  But we saw no shortage of hippos and impalas and I certainly got the sense that this park is something quite special, with an impressive team behind it who have not only increased tourism by 300% but also markedly improved the outlook for the wildlife population. 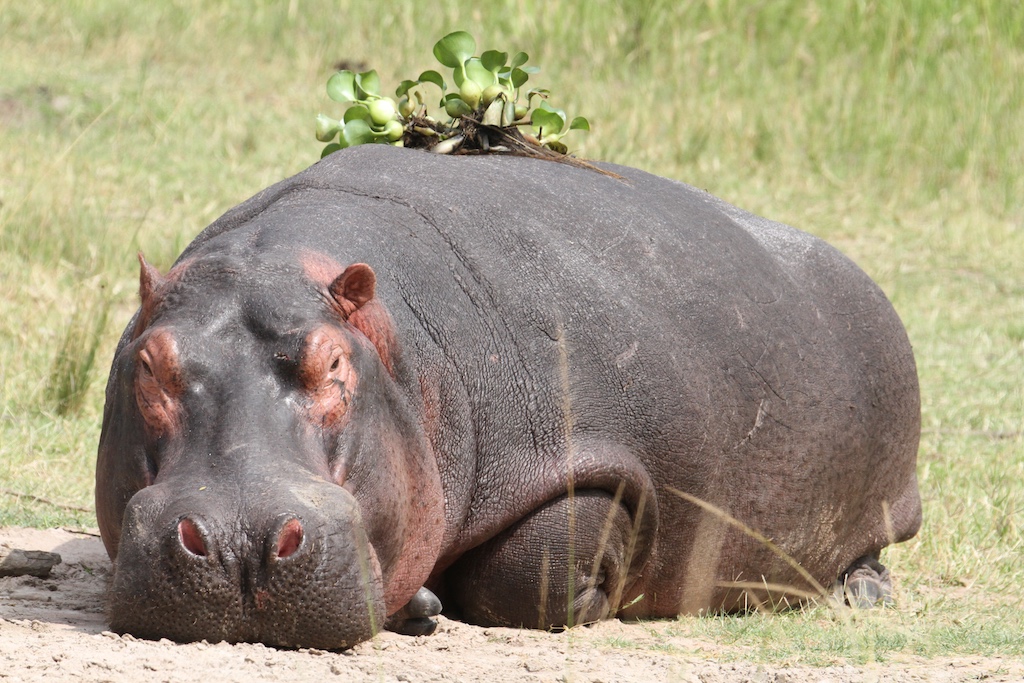 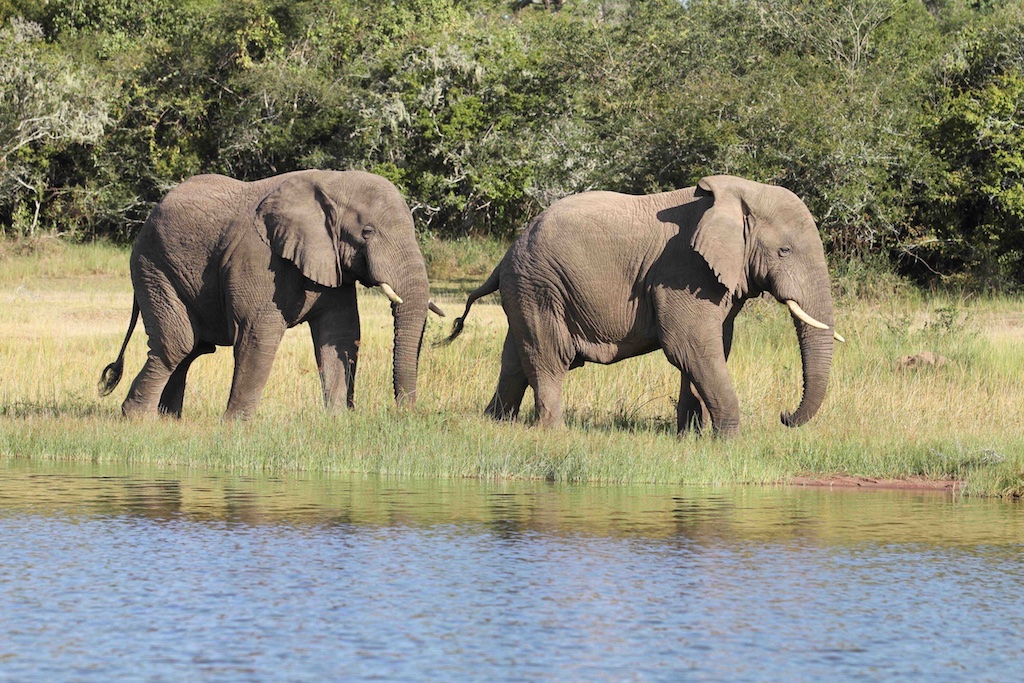 To say the least, the elephants of Akagera have really piqued my interest.  Very little is known about this population, which must have established its own leadership and hierarchy after being introduced as orphans, and then 20 years later, experiencing the impact of large numbers of people invading their habitat during the terribly traumatic genocide.  Very soon I'll be announcing our first M&R Wild project.  I'm so excited about this... You guessed it, it's got something to do with Akagera's elephants!  More on this coming soon.... 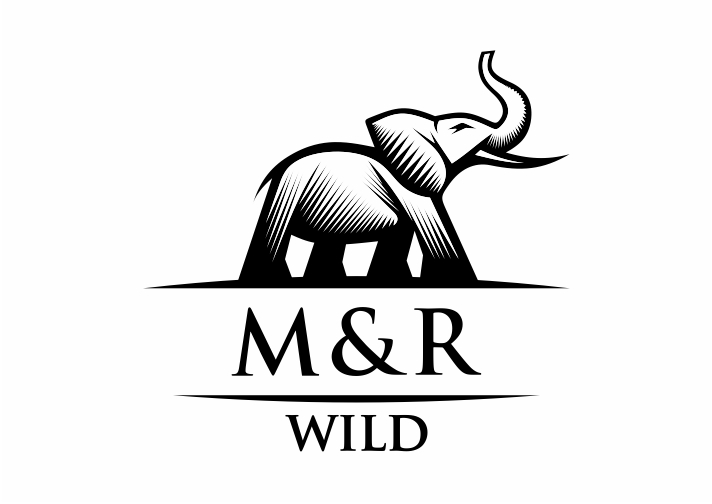