News From Across Africa

Being a roving zoologist is the best job in the world but it's not all bush glamour.  Sometimes it's hard office grind too.  2019 kicked off with a whole lot of time spent at my desk entering the data from last year's Akagera Elephant Project, Rwanda, painstakingly analysing photos and videos, trying to work out who was who in Akagera's elephant population.  We have now identified 40 of Akagera's approximately 100 elephants with clear photos showing ears, tusks etc, and the process will continue this December as another group joins me in the field.  I'll be running a workshop for Akagera's community guides to enable them to fully participate in the research as part of their day jobs guiding tourists in the park, and if all goes to plan, I'll also be taking on a Rwandan student from the University of Rwanda.  Guides in the park are already contributing to the project and have access to the existing elephant database.  If you would like to participate in the Akagera Elephant Project this year, there is only one spot left for a single person so you need to claim it now.  To register your interest in next December's field season (2020), please drop me an email.

Check out my new short video on the project which I launched last month in Singapore at my speech for the Royal Geographical Society.

Tragic news that 13 rhinos have been poached in the past year in Botswana has rocked the conservation world.  This on the back of Elephants Without Borders' Dr Mike Chase's suggestion that elephant poaching was on the rise in Botswana following their last population survey, as reported last year.  You may well be asking what is happening in Botswana, given the country's immaculate record in wildlife conservation.  My view is that sooner or later some poaching was going to come to this country, given it is pretty much the last refuge and has been virtually poaching free.  There's politics at play here, with Botswana's new President Masisi, appointed by former President Khama, now in an open rift with the former President, partly due to the poaching that has risen up since he took over.

“Thirteen is not a large number to lose compared to what we have seen in South Africa, but we only lost one in my decade in office, having come from a point in the mid-Nineties when they had been poached to virtual extinction,” said Mr Khama.

Most of Africa's rhinos live in South Africa, so this is where most efforts have been taken to conserve the populations in the war against poaching.  In South Africa, poaching of rhinos is on the decline overall, but it's still a long way from where we were in 2007.  No country can afford to drop the ball while the demand for ivory and rhino horn exists.  If we have learned anything it's that on the ground anti-poaching teams need to be properly armed and trained to protect these species if they are to have any chance of survival. 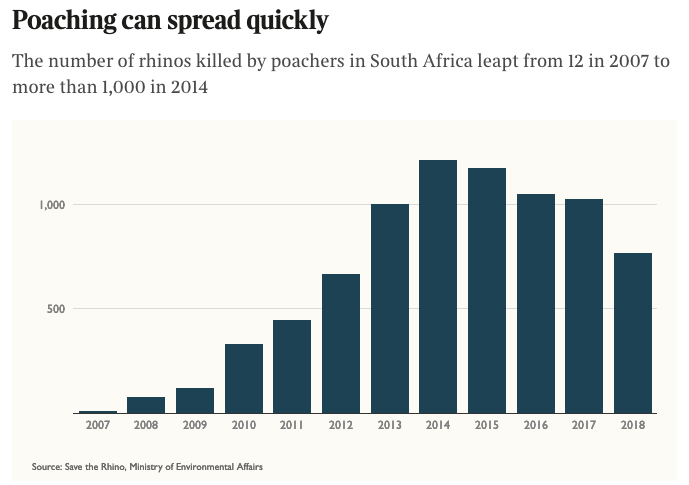 I believe it's essential to continue to support Botswana's ecotourism industry as this is essential for the conservation of the habitats these species need to survive.  Play your part by going on an ethical safari with me that gives back to the conservation of the places we visit.  I have only got 4 spots left on my Botswana safari coming up next June (2020).  For more info or the full itinerary drop me a line here.

In exciting news, two prides of desert-dwelling lions have returned to the infamous Skeleton Coast of Namibia after an absence of almost four decades and have been documented eating seals, brown hyaenas, cormorants and the occasional flamingo.   The fact that lions have returned to this hostile wilderness area is incredible, after being wiped out due to conflict with local livestock farmers in 1990.  Read more here.

I would love to take a group to this incredible marine and desert landscape where I used to spend time many years ago when working in conservation in Namibia, so please contact me if you'd like receive updates on my Namibian safari plans for 2020/21.   Check out the amazing Shipwreck Lodge by Natural Selection which will be on my itinerary.  This is a journey for the true adventurer who wants to get right off the beaten track into the wilderness!  Namibia is one of the best places to see wild rhinos and this will be a key part of the safari.

YES, I'M INTERESTED IN JOINING TAMMIE IN BOTSWANA OR NAMIBIA!