"Look at all the animals!"

This is a phrase you're likely to hear and say yourself about ten times on your first day in the Mara-Serengeti ecosystem.  It's impressive for an adult, but for kids who are so zoned in to everything that moves this East African gem is an absolute wonderland of sights and sounds.

Kenya's Maasai Mara, in particular the Mara-Naibosho Conservancy, really is the bees' knees when it comes to family safaris.  In this month's blog I'm going to share why I took my own family there on their first East African safari and what made it truly unforgettable as far as family holidays go.  Solo and Shep are still talking about their new friends, our Asilia Africa guides and Maasai warriors, Daniel and Karia, and the time that Shep spotted a leopard at dusk on the last morning.  The vast open plains of Naibosho Conservancy are a feast for the eyes because of the sheer number of animals feeding on the short green grasses.  Everything from warthogs, wildebeests, zebras, topis, elands, Thompsons' and Grants' gazelles and impalas to relaxed herds of elephants and big herds of Cape Buffaloes.  If you tried to count everything in view there would literally be thousands.  When it comes to kids on safari, this is brilliant because with kids' short attention spans they never get bored for a second. 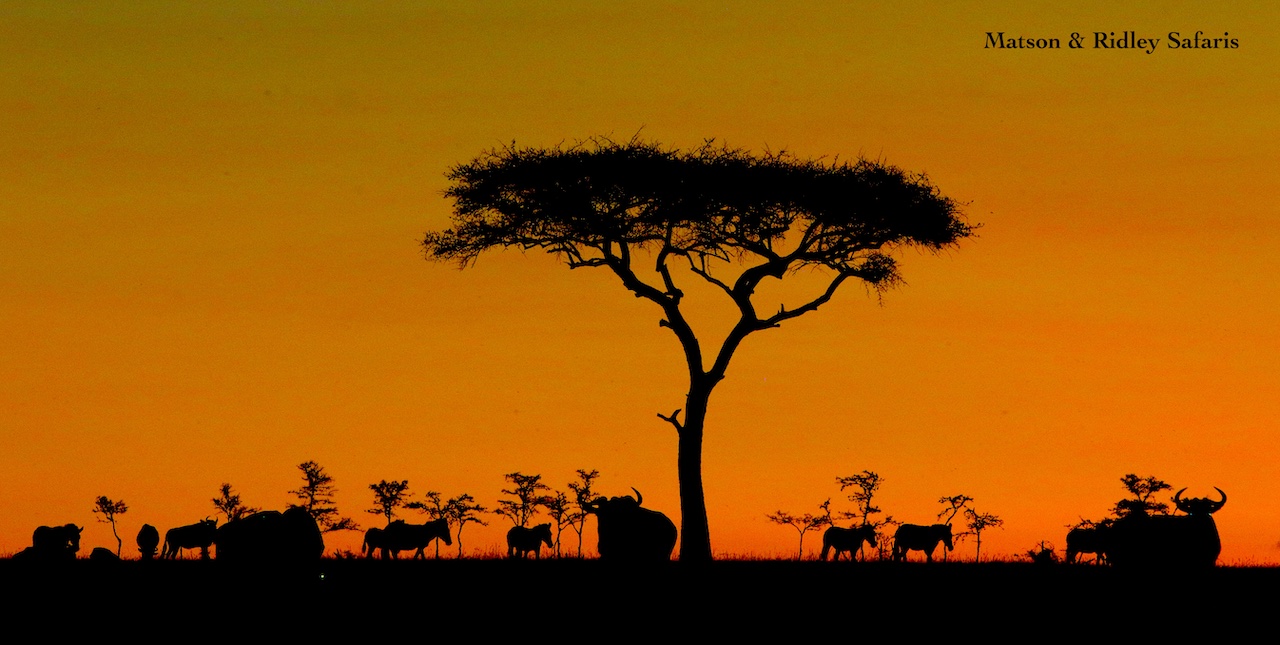 But this area is all about the big cats, and we were fortunate to see lots of lions, a leopard and cub, and two cheetahs during our stay.  I have to say there's nowhere like the Mara-Serengeti ecosystem when it comes to lions.  There were lions hunting, mating, lions fighting each other, lions roaring just beyond the campfire as we ate dinner one evening, lions hunting, lions fending off jackals...  Seriously, you wouldn't know they were one of the planet's most threatened species, with only 20,000 left in the wild, when you're in this part of the world. 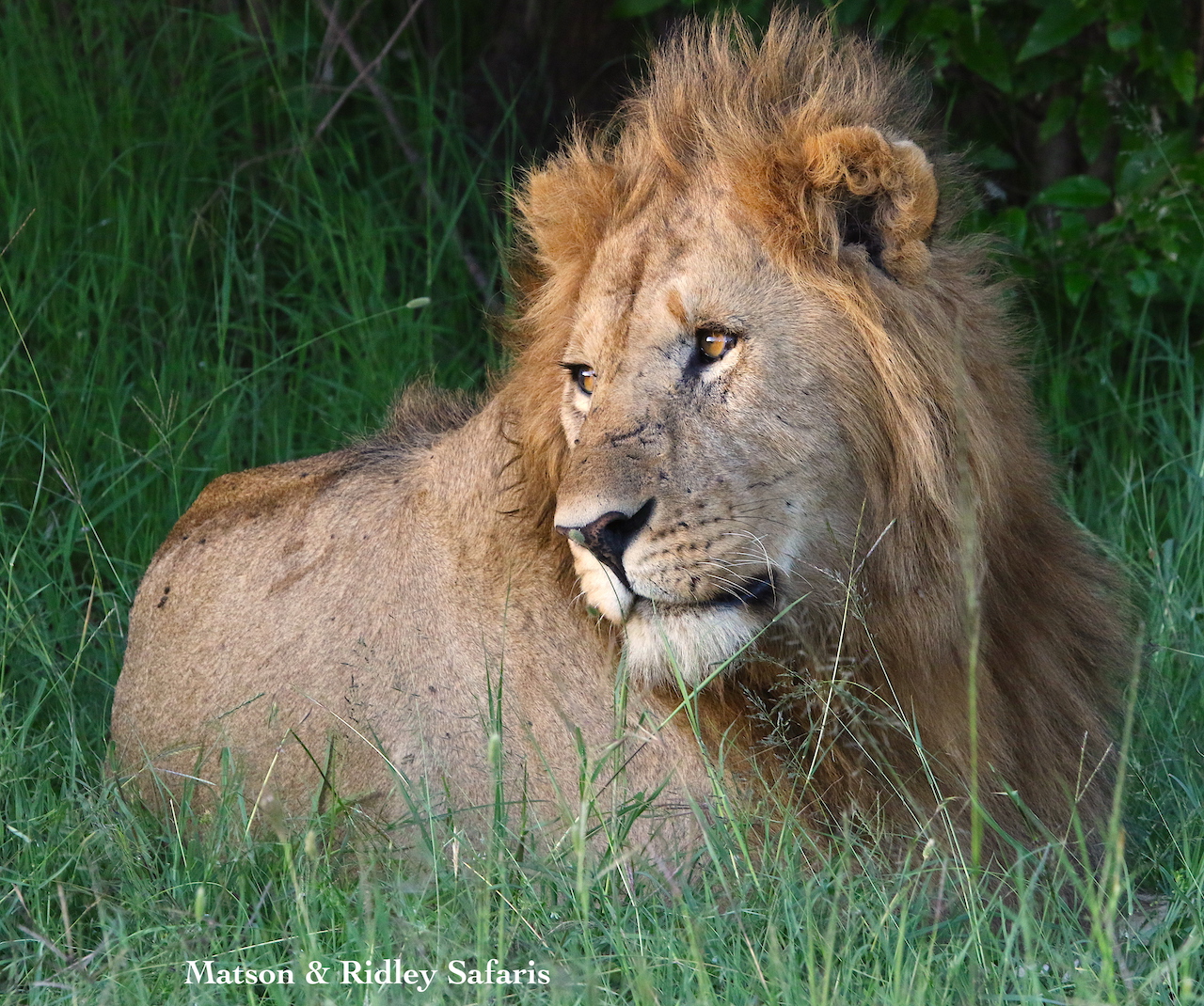 In Mara-Naibosho Conservancy the lions literally ignore us humans and so you actually see their natural behaviour as if we're not there.  It's the most incredible privilege.  Seeing the natural behaviours is a big deal because it means if you're lucky you can be a witness to a hunt from start to finish.  On our second morning, Daniel and Karia spotted zebras and topis far, far in the distance on a plain moving in a way that looked suspicious.  Binoculars up - a quick scan - some Maasai words exchanged and we were on our way to the action.  From many kilometres away, they had spotted Simba just by noticing some unsual prey movements on a distant plain!  We drove across the short green grass plains to the area where there was indeed a young lioness watching a herd of zebras with the kind of intensity you only see when one is hungry and intending to kill.  She was out in the open in full view of the herds, which really put paid the idea I've always had from watching lions elsewhere that they like to hide behind cover to hunt in order to take the prey by surprise. 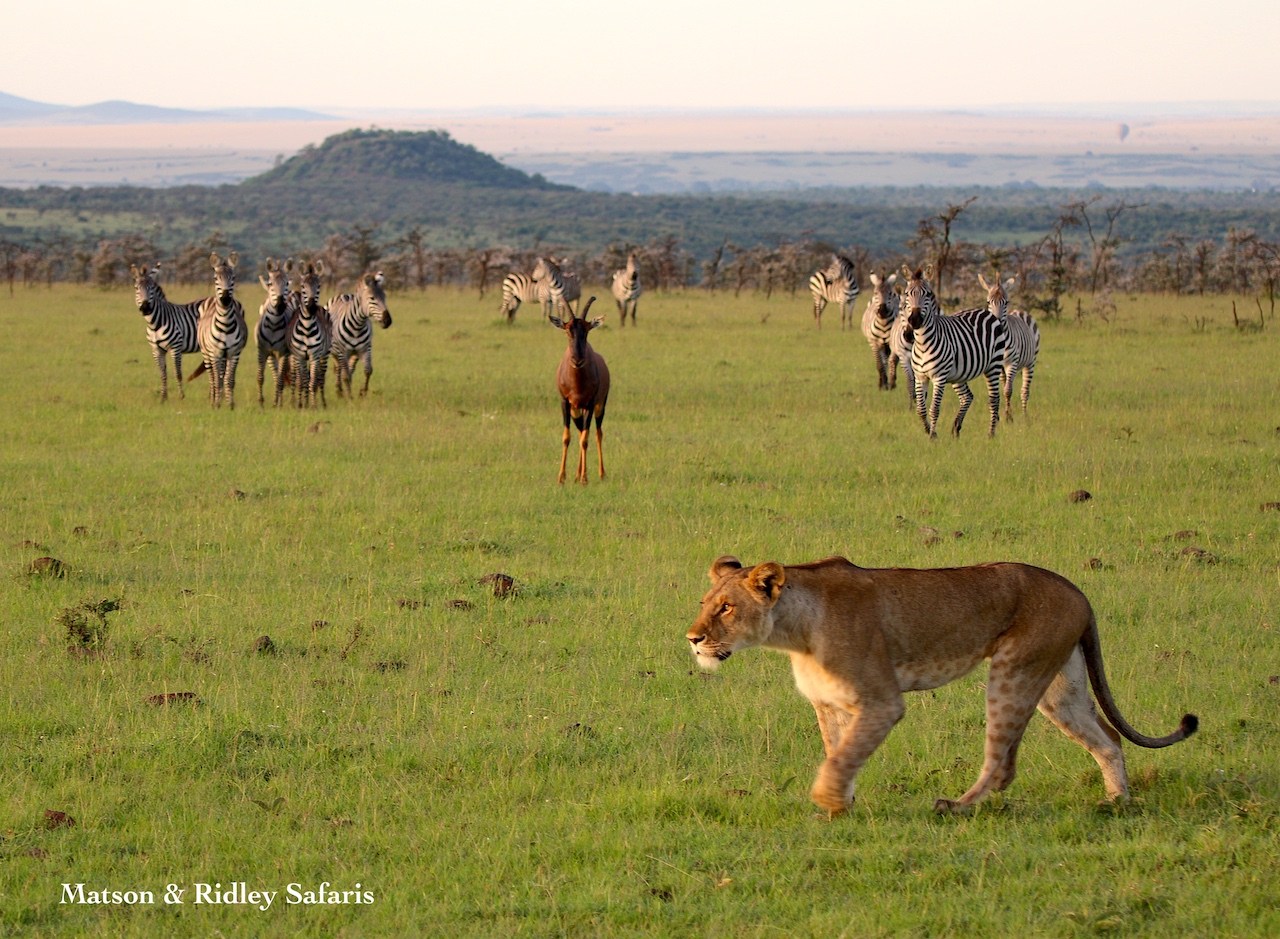 We were there during the baby topi season, early January, and she clearly had baby topi on her mind, ignoring the fully grown adults on the plains.  We watched as she appeared to be looking far into the distance onto the other side of the plain and Daniel said, "She's seen that baby."  A baby topi that had just been born that morning was following its mother away from the plain, but it was too late; the lioness had spotted him.

Now this was all very exciting, but I was well aware as we charged across the plain, with no one else around but our vehicle and the lioness with topi for breakfast on her mind, that I had two small men in the open vehicle who may be feeling slightly torn about what to make of the predator-prey battle about to unfold in front of us.  Our eldest, Solo, at ten, could rationalise what was happening, but I could tell from his face he was feeling absolutely heart-broken about what was about to happen to the newborn topi.  Young Shep, at six, had never seen anything like this before and his inner-scientist was analysing everything that was happening with complete fascination.

The truth is, I've seen on many safaris, if you are lucky enough to see a hunt you never know how different people will respond.  It leads to some really interesting conversations about the circle of life and how things work in nature that people who've grown up in the city may never had the chance to really understand until they go on safari.  With kids, it's tough to watch a kill, but it's an important conversation to have, because after all, the idea that you're on the predator's side or the prey's side is completely irrelevant in the wilds of Africa.  What matters is that every species depends on others to survive, just like we do.  A lion is hungry and must eat, just like us.  The scavengers - jackals, birds of prey, hyenas - take whatever is left behind.  Nothing is wasted (not like us).  Everything is connected. 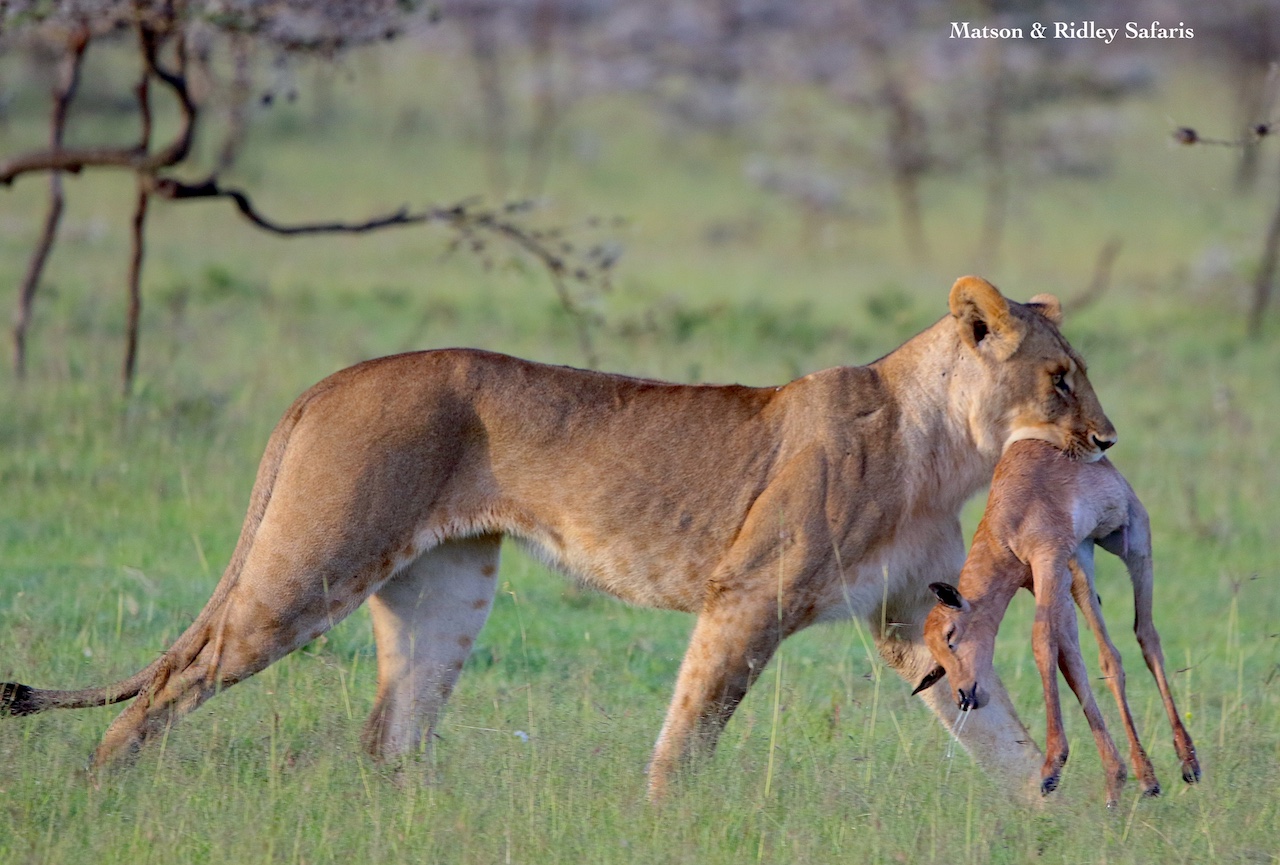 A day later we saw the young lioness again and found she was actually part of a larger pride which had several large cubs, who were not large enough to hunt for themselves yet.  By hunting alone that morning she had taken some pressure off the adult females who had to feed both themselves and their cubs.  So the conversation continued.  And that's a big part of what a family safari is about.  Minds make gigantic shifts in Africa, especially young minds.  This is a big part of why we take our kids to Africa, and why we go ourselves, because there's nothing like being out there in the bush among the predators and prey to completely get a fresh perspective. 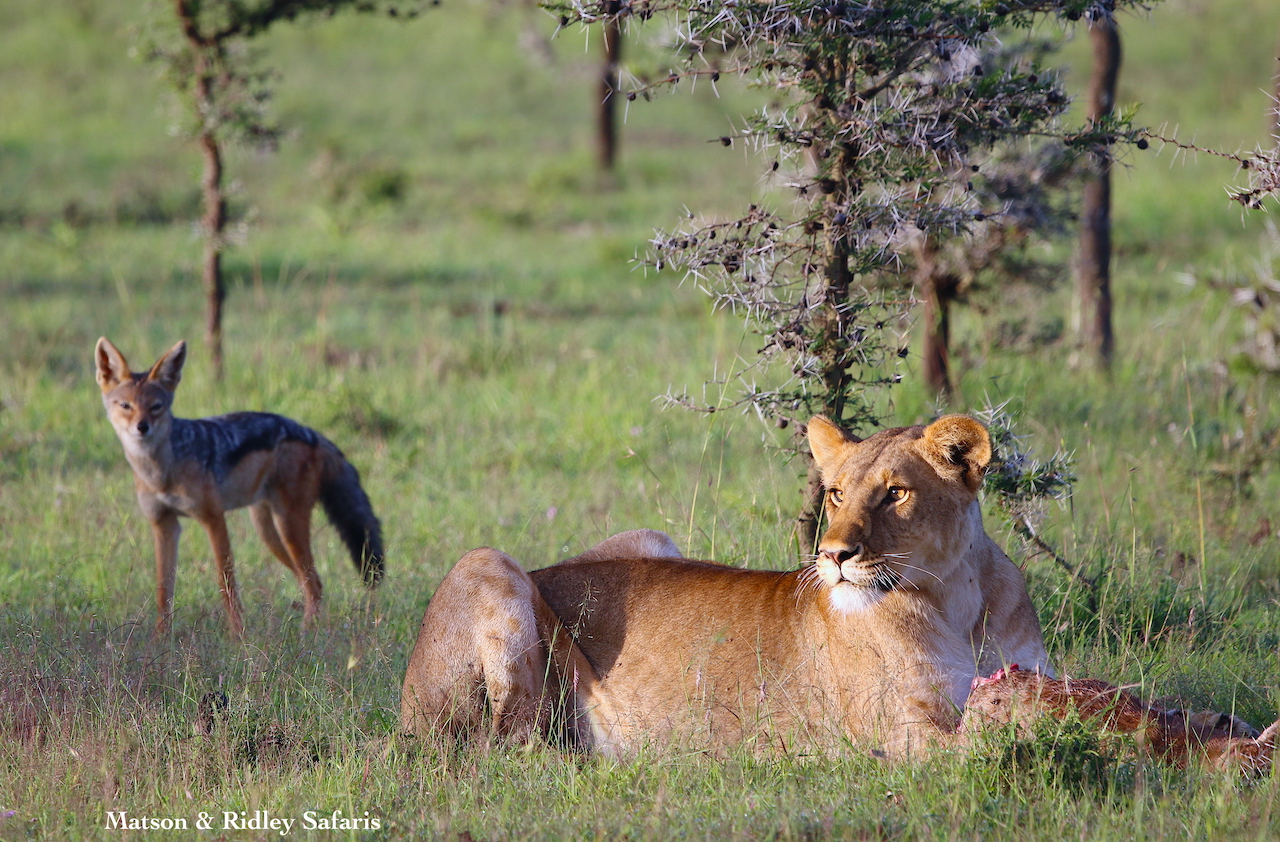 Other firm highlights of the Naibosho Camp experience for the boys were learning how to be Maasai warriors from our two Asilia Africa guides, Daniel and Karia, who were both themselves fathers of young kids.  With incredible patience they showed the boys how to shoot bows and arrows and spears the way the Maasai do.  They showed them how to make fire with just two bits of wood and no matches.  They taught them about the whistling thorn Acacia and the symbiosis the thorny bush has with the cocktail ants that inhabit it and they got to taste some of the galls of the plant, which are traditionally eaten by the Maasai when young.  Daniel and Karia taught Solo how to count to twenty in Swahili (which he still remembers) and both kids now know most of the Swahili names of all the animals.  Gosh, what a classroom Africa is!  Check out my short video below of some of what we got up to.

The other great advantage about being in Mara-Naibosho Conservancy is that because you're not in a national park there can be limited off-road driving, walking and night drives, which really opens up the whole safari experience.  There are far fewer vehicles in the conservancies compared to the main parks because they are limited to 3 vehicles per sighting.  And best of all, every night you spend there you're directly contributing the local community's livelihoods.  This is conservation through community upliftment at it's absolute best.

The way these conservancies work is they form buffer zones around the park, providing extra protection for the animals and increasing their effective habitat.  The local people live in the conservancy in certain areas and are allowed to graze their cattle in reasonable numbers.  This actually has the advantage of keeping the grass low, which improves game viewing.  It's not like you're seeing cattle all the time, but occasionally you might see a young Maasai warrior strolling along the plains before the sun sets as he brings his cows home.  It's all part of the experience and actually it's awesome that the local people are part of the conservation efforts in their areas, not excluded from it.  Plus you get to have great conversations with your kids about how next time they complain about washing the dishes they should be grateful they're not out doing the same jobs that Maasai kids are by the age of 6, like herding cattle through an area full of lions! 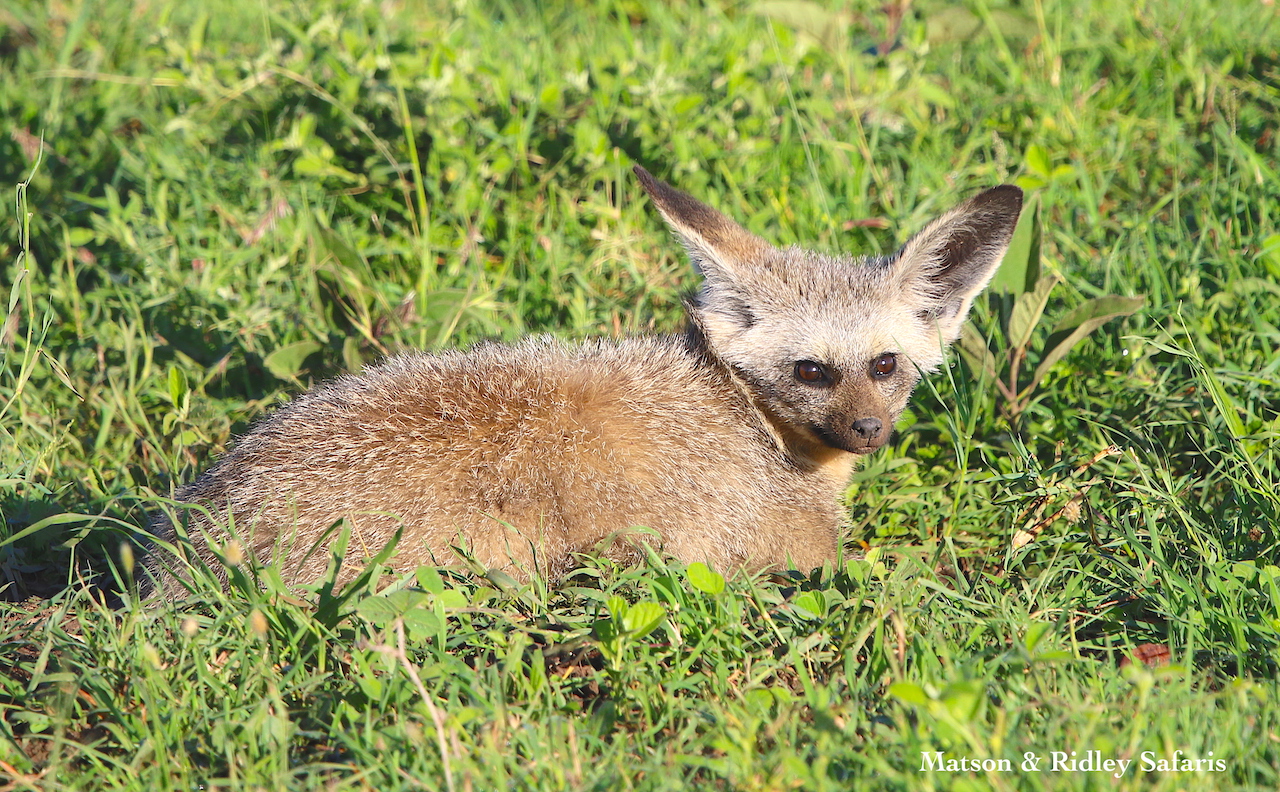 If you've ever imagined yourself on the plains of Africa, please get in touch and let us plan your safari.  We organise family safaris in Africa in Kenya, Tanzania, Botswana and Namibia, just to name a few of the amazing places you can experience with your kids.  Asilia Africa's camps all have family rooms available that are larger tents with a separate bedroom for kids.

To join Tammie's July 2021 Kenya/Tanzania Safari, please contact us now for details.  This safari includes both Mara-Naibosho Conservancy and the Serengeti during the Great Wildebeest Migration.  Seriously, it's going to be AMAZING!

Contact us now for details of Tammie's safaris in Namibia, Botswana and Kenya/Tanzania mid 2021. 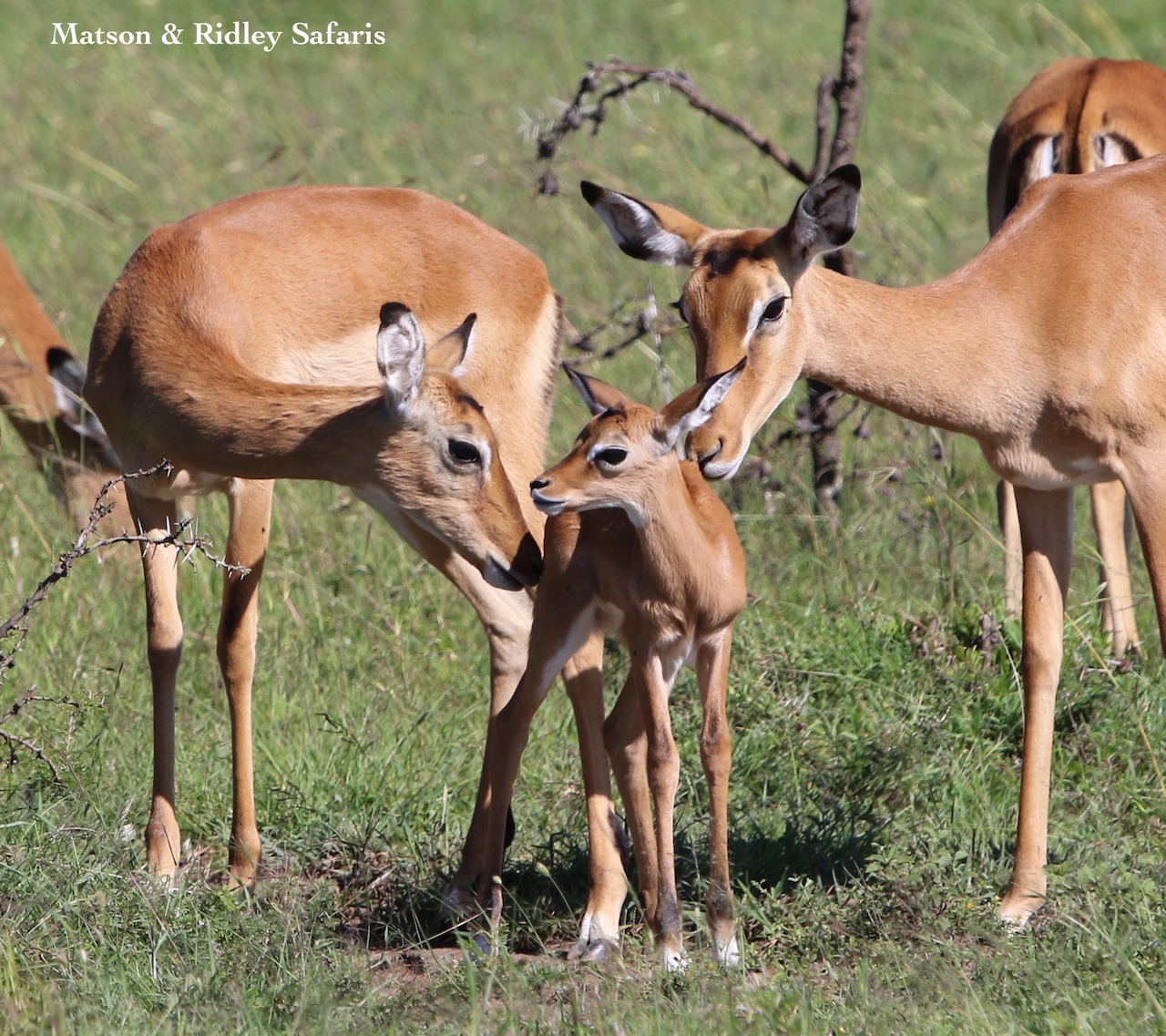