What Makes a Safari 'Ethical'?

Wildlife conservation is all about people.  That's one of the most important things I've learned in my two decades of working in wildlife conservation.  If you provide benefits to the local people who live with wildlife, benefits that directly translate to an improvement in their living conditions through employment, income and projects like schools and clinics, the people become advocates for the wildlife because they recognise them as assets and wildlife conservation follows.  But what is an 'ethical' safari?  You've heard me talk about it before.  That's what we specialise in at Matson & Ridley Safaris - life changing journeys that make a difference.  But what is it that we actually look for when choosing the areas and camps that we send our guests to? 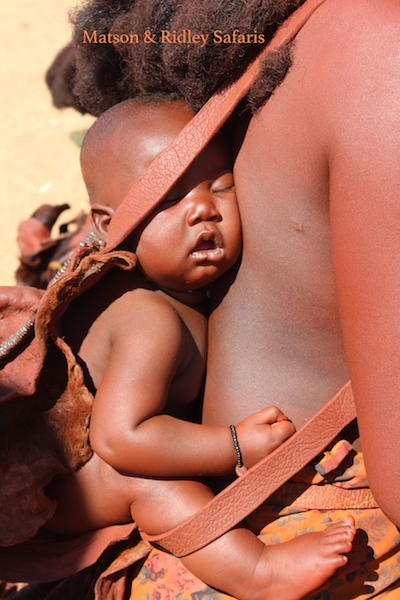 The creme of the crop when it comes to ethical safaris, in my opinion, are camps that run in partnership with local communities, camps that give the local Indigenous communities a decent cut of the profits and truly empower them to build better lives for themselves.  Some of the best examples I've seen are in Namibia, like Desert Rhino Camp at Palmwag Concession in red, rocky Damaraland.  It's a partnership between ecotourism operator Wilderness Safaris and 3 communities on the border of the Palmwag concession and Save the Rhino Trust.  You really feel the difference when you stay at this camp.  The staff are not just employees; they're landlords.  When the locals have a direct stake in a tourism operation, the level of service, the friendliness and the general feeling of the camp is just so much better.  All of my guests that stay at Desert Rhino Camp say the same thing.  It's so special. 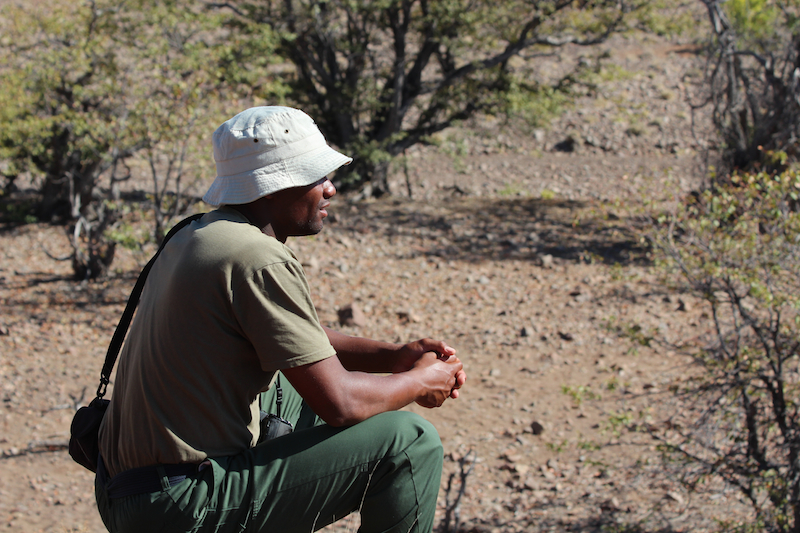 Save The Rhino Trust ranger watches a rhino he tracked that morning for my safari group the September before last.  SRT rangers are paid for by the funds generated by the tourism at Desert Rhino Camp, Namibia (photo: T. Matson)

Serra Cafema Camp is another example, being a partnership between Wilderness Safaris and the traditional Himba people of the Marienfluss Conservancy, north west Namibia.  These partnerships are typically drawn up, usually with the involvement of local conservation groups, to ensure the maximum benefits flow back to the local people, including a percentage of every tourist bed night, most of the jobs in the camp, training in hospitality and often also projects to help local schools/clinics.  What I love about Desert Rhino Camp is it also pays for the salaries of the local Save The Rhino Trust rangers.  You benefit from this when you stay there as you get to go out and track rhino with the rangers themselves.  It's a brilliant way of doing the business of conservation because it ensures a sustainable income for the locals and that's what keeps the poaching at bay.  Wilderness Safaris' Damaraland Camp is another great example of a community partnership camp, run by the locals (mostly women, which I love - girl power!) to the high standards of Wilderness Safaris who provide the local training. 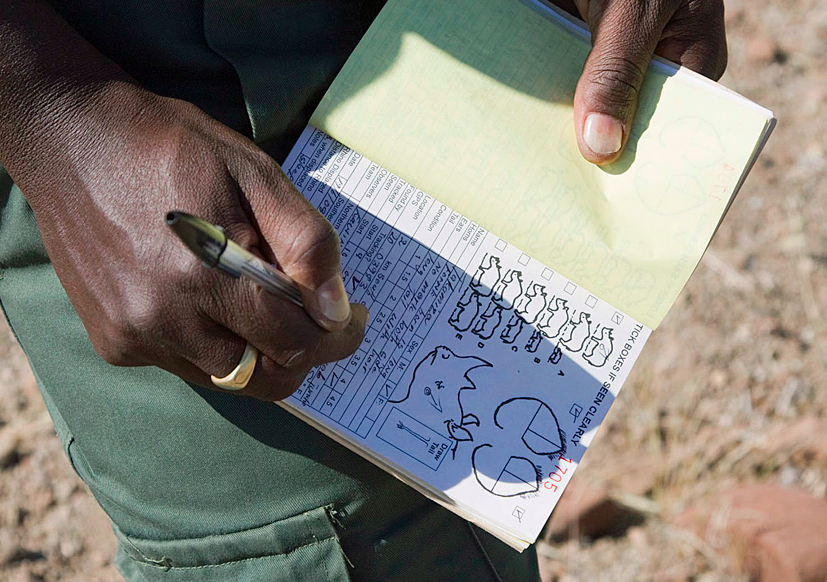 Save The Rhino Trust tracker entering data as part of the rhino monitoring program in Palmwag concession, Namibia.  Their work is what keeps the critically endangered desert-dwelling black rhinos alive, and it's partially funded by tourism (photo: Wilderness Safaris).

So, not everywhere can have a community partnership where the land is effectively leased for tourism and conservation purposes.  Some land is privately owned and this can work really well too.  Look at Ongava Game Reserve, on the border of Etosha National Park, Namibia.  They have an excellent rhino conservation program and thriving populations of wildlife, including my old favourites, black-faced impalas.  Again it relies on income from tourism to fund this conservation work. 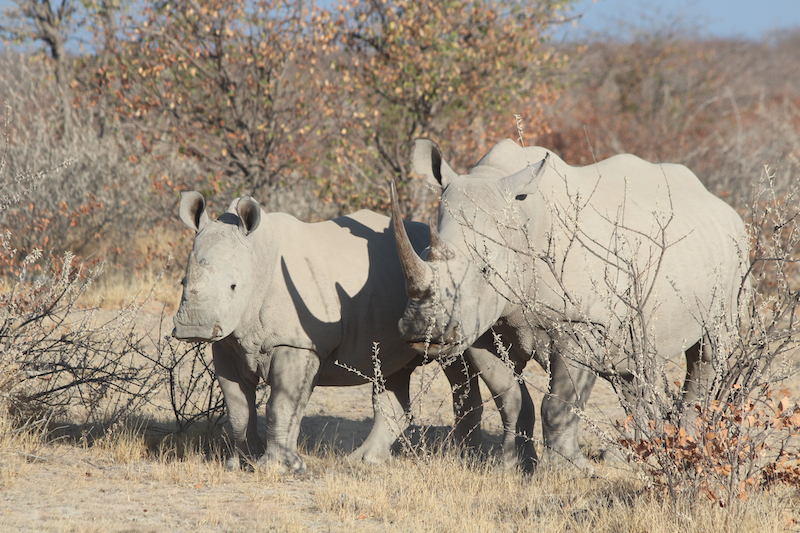 Another key point to make that was raised around the campfire on my last conservation safari in Zimbabwe was that if the land wasn't being used for tourism, it would be used for something else that there's a good chance would be less conservation-friendly to the wildlife, like subsistence agriculture or mining.  High end tourism does cost a bit to experience, but you know that when you're there, you're directly ensuring that the local wildlife is kept alive because simply by having a strong presence in an area, that helps keep the poachers out.  Recently it was revealed that the south western corner of Zambia experienced shockingly high levels of elephant poaching in the last few years, something like 95%, and that's due to the lack of human presence in the area (no tourism, no wildlife-related activities, no researchers).

Thirdly, the other thing I look for in a safari camp is what efforts they're taking to keep their footprint low.  This hails from my former days doing environmental impact assessments of the Wilderness Safaris camps in Namibia.  What we're looking for is efforts to be using solar power, removal of rubbish, effective sewage treatment, limited use of plastic bottles (provision of reusable bottles ideally), regular game monitoring, paths between rooms and main areas so that the human impact is contained....  Most of the operators we use make some efforts around these things as they want to minimise their human impact and keep their areas looking good.  It's always impressive to me when safari camps have a resident researcher as well, such as the brown hyeana researcher, Emce Warren, based at Hoanib Skeleton Coast Camp.  My group got to hear her talk about her research and watch the amazing film "Vanishing Kings" about the desert-dwelling lions in the area. 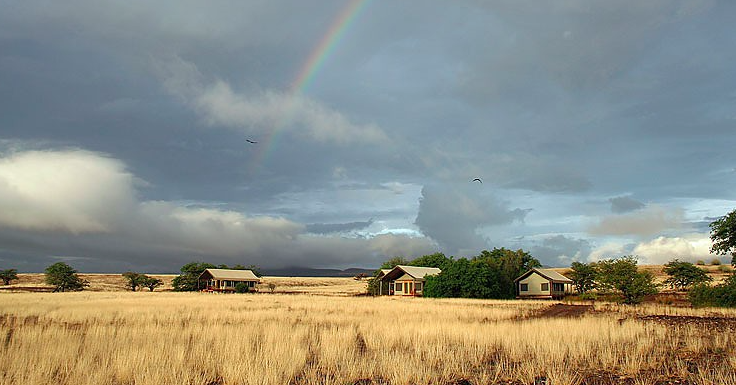 The safari operators we use are not just good at, and constantly improving on, their environmental management.  They also know how to show you a good time.  People are often pleasantly surprised by the level of bush luxury you get in these back of beyond places, from the warm water running showers, private ensuites and 1000 thread sheets, the hugely comfortable beds, to the thing that you can't put a price on - the peace and quiet!  You also pay a premium for having these places to yourself, as the higher price tag means the camps can limit their tourist numbers.  That's important, because tourism isn't always good.  Mass tourism can be very destructive on the environment.  Limiting tourist numbers gives you a better experience, because you're not packed in like a sardine and sharing every sighting with dozens of others scrambling for position at a cheetah kill.  But it's also key to protecting these natural ecosystems that they remain destinations for limited numbers of us. 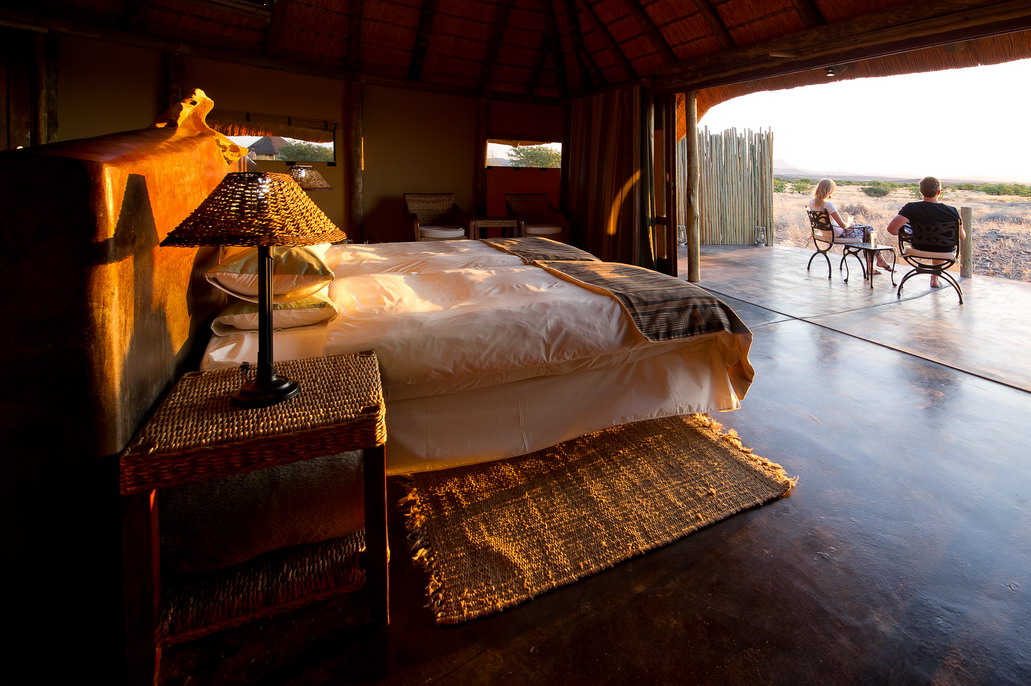 Some safari operators really go the extra mile by ensuring that their camps are accessible to the local people at certain times, providing essential environmental education.  One of the reasons I've liked sending people to Wilderness Safaris camps is that I know what happens behind the scenes, having worked for them myself, but of course they're not the only ones making efforts like this to ensure community education.  I love the Children in The Wilderness program, which gives local Indigenous kids a chance to go out and experience the wildlife at special camps just for them, held several times a year.  It's really important that the local people get to appreciate their natural assets and see them themselves, but obviously few could afford to go to these safari camps if they had to pay what we do.  So programs like this are really important, engendering an appreciation of wildlife among the Indigenous people that live nearby from a young age.  I'd love to see more of this.

One of my guests, Charmaine, on a Masai walk to a local village, when we stayed at The Highlands by Asilia Africa in Tanzania last year.  The Highlands is a community partnership camp, located near the Ngorongoro crater in Tanzania. I like to include it in my group safaris because Asilia Africa is an ethical operator doing all they can to ensure the local communities directly benefit in their high end, low impact tourism operations.

A useful guide was compiled by ecotourism guru Colin Bell and David Bristow recently that I refer to regularly and that's the excellent book and website, Africa's Finest.  Take a look at their top 50 lodges/camps based on sustainability criteria. It includes a few that I regularly send my guests to, including Meno a Kwena Camp in Botswana, Little Makalolo Camp in Zimbabwe and my old favourites, Serra Cafema Camp and Desert Rhino Camp in Namibia mentioned earlier in this blog.

Later this year I'm taking two separate groups to see the endangered mountain gorillas in Rwanda.  The mountain gorillas are building up in population directly because of the investment in ethical tourism supported by the Rwandan government.  We'll be staying at Sabyinyo Mountain Lodge, which is located in the Virunga mountains, and I can't wait to see first hand how our tourism dollars are supporting local conservation efforts, almost as much as I can't wait to spend some time with those gorillas! 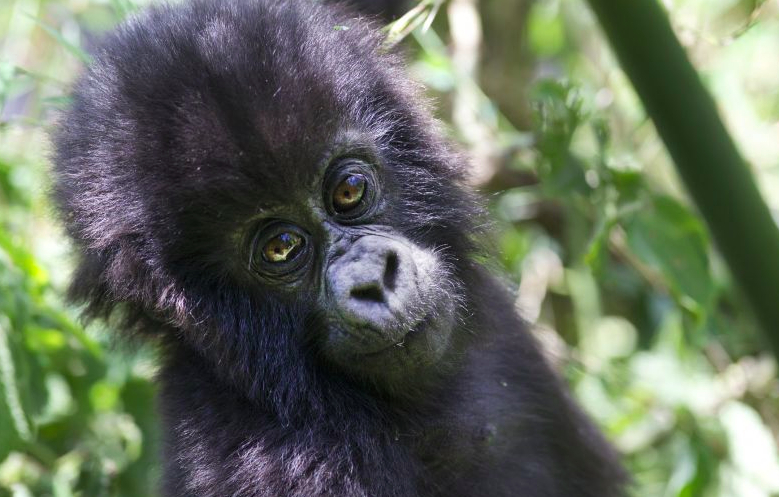 So before you book your next safari, think about whether you can go the extra mile and make it an ethical one.  You do pay more for this kind of experience, but you also give back much more and you ensure that your hard earned dollars are spent in a way that ensures the wildlife and local people you're going to Africa to see will thrive for many future generations.