10 Things You May Not Know About African Wild Dogs

Is there anything as cute as African wild dog puppies?  It's definitely one of the highlights of going on safari if you get to see Africa's painted dogs tending to their youngsters a their den or on a hunt, especially given their rarity in the wild (there are thought to be only about 5000 or so left on the entire continent).  But did you know that these unique carnivores need huge areas to survive, that they are 'caring and sharing' towards each other, and that their play with each other actually serves an important purpose?

Two impressive researchers, Dr Rosemary Groom, and Masters graduate Jess Watermeyer, of the African Wildlife Conservation Fund, get to study these highly endangered creatures in their day job in the Save Valley Conservancy, Zimbabwe.  I asked Rosemary and Jess to share their insights into African wild dog ecology with us.  Read on - it's fascinating stuff!

The scientific name for the African Wild dog means “painted wolf” (combination of Latin and Greek).  Wild dogs are not related to domestic dogs and cannot interbreed with them.  They are a single species on a unique evolutionary lineage and if anything are more closely related to wolves than dogs.

No two wild dogs have the same markings, which makes them easily identifiable as individuals.  When they are born, they lack the tan colouration but their white markings are clear and do not change as they grow up, so you can identify which adult was which 3 week old pup! 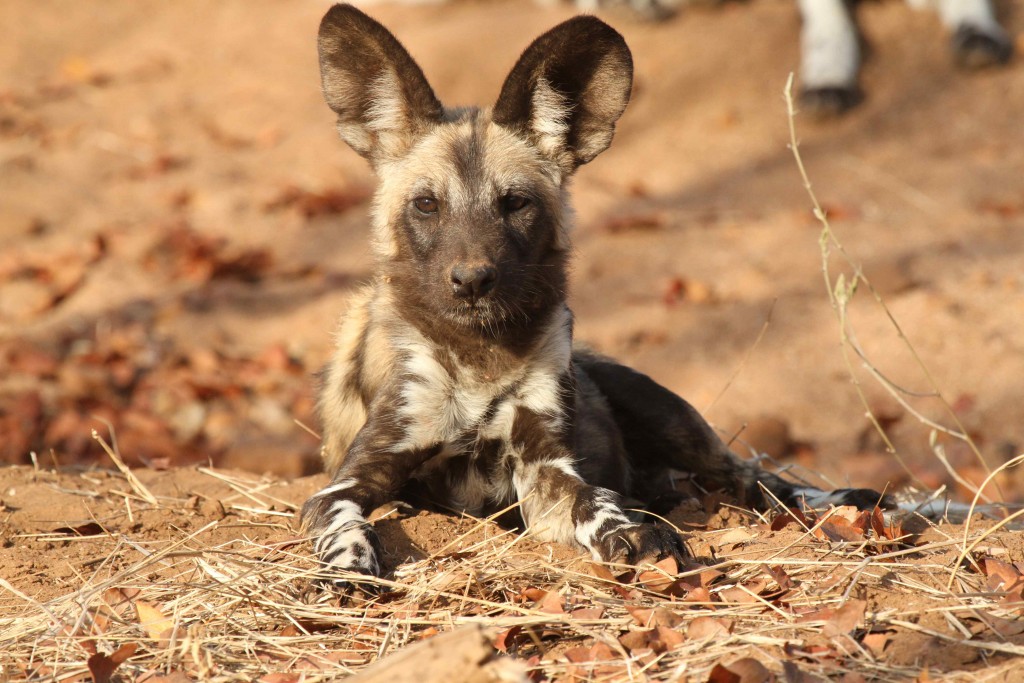 Wild dogs are found only at very low densities – on average 2 dogs per 100 square kilometres. This means that an area the size of Greater London, which is home to 7.5 million people, could only support one or two African wild dog packs.  And Washington DC – home to c. 700,000 could support less than 4 wild dogs.

Wild dogs have a very caring social structure. Pups that are old enough to eat solid food are given priority at a kill, even over the dominant pair. 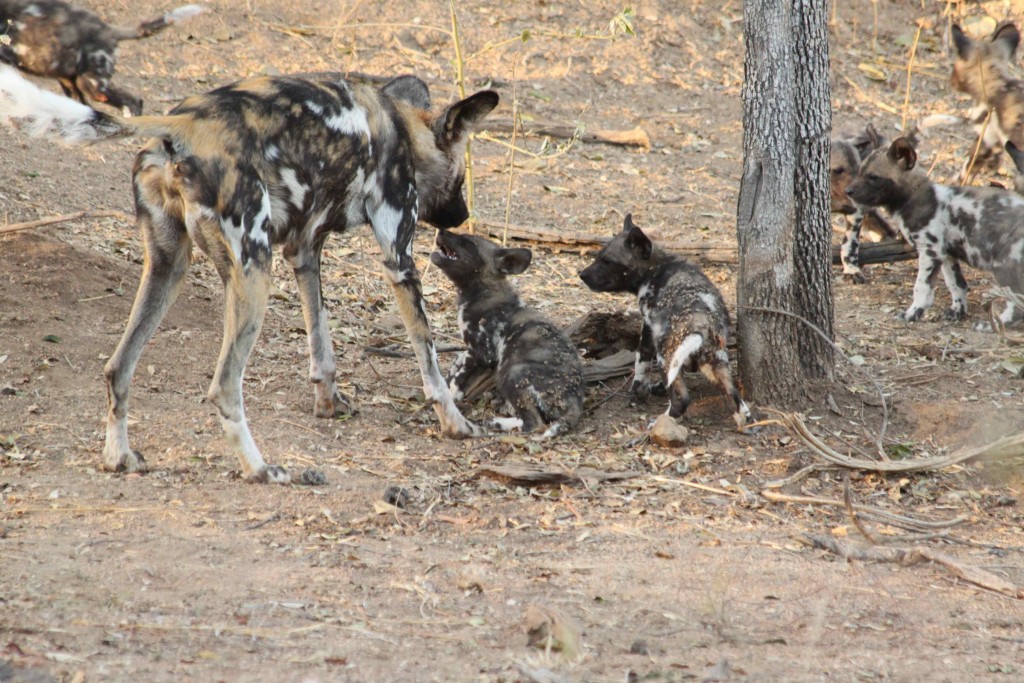 The dogs have a peculiar and rather playful ceremony that bonds them for a common purpose and initiates each hunt. They start circulating among the other pack members, vocalizing and touching until they get excited and are ready to hunt. This reaffirms the social status – affirms sub-ordinance and dominance which prevents the need for aggressive behaviour within a pack.

African wild dogs are obligate cooperative breeders. Usually only a single pair within the pack will breed and the rest of the pack will help them to raise the young (e.g. by feeding and also babysitting). They also hunt cooperatively. 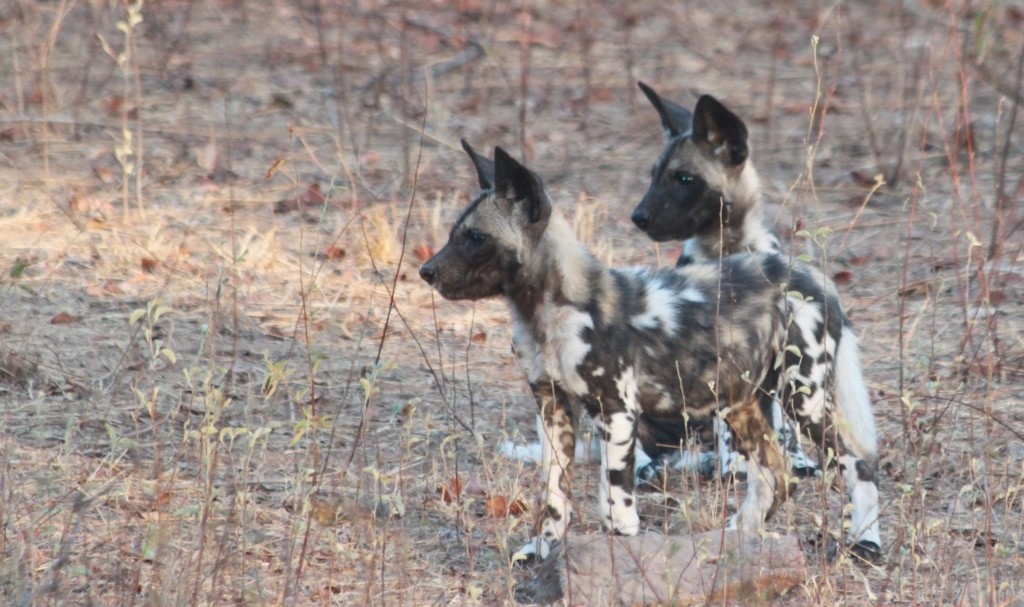 Wild dogs often use termite mounds that have previously been excavated by aardvarks or porcupines as a den.  The pups are born in the den and only emerge for the first time at 2-3 weeks of age.

Wild dogs do not bring back bones and chunks of meat to the den.  Instead, when the pups are weaned, any adult returning from a successful hunt will regurgitate meat for the pups. This helps to prevent a smelly build up of old bones etc at the den which may attract lions or hyenas which can kill pups. 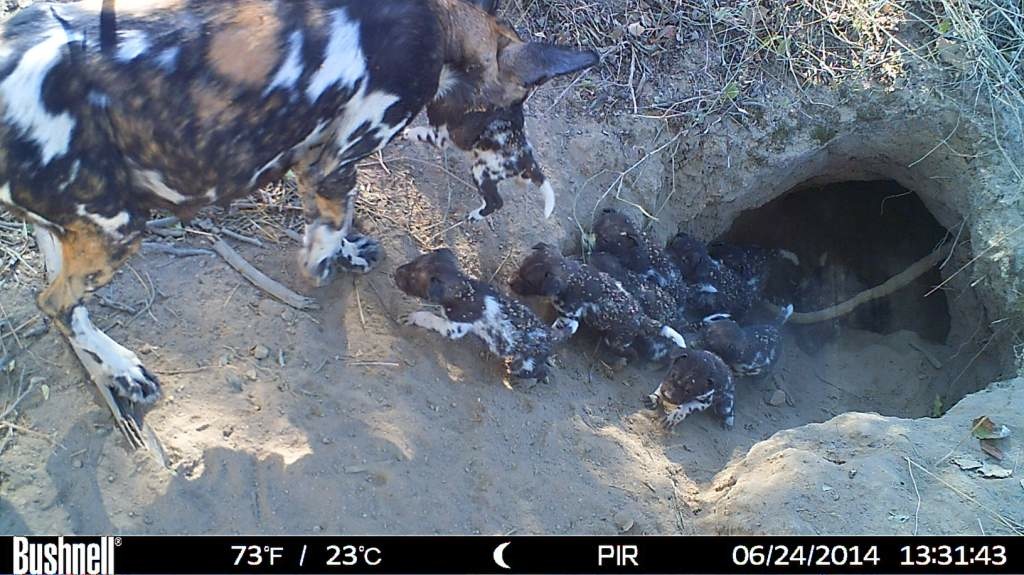 When feeding, they lack aggression towards each other and share the kill; even with members who may not have been involved in the actual hunt (this is unlike most other social carnivores). Wild dogs look after the weak and the sick in the pack and bring food back for them.

African wild dogs were once considered a pest and were shot in large numbers in parts of Africa including Zimbabwe.  Fortunately the mind set has changed and the dogs are now valued as the unique and remarkable animals they are. 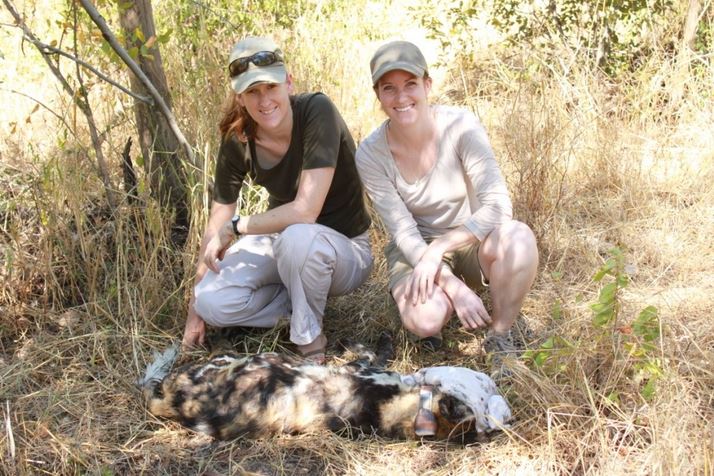 I don't know about you, but I always think the more you get to know a species the more respect you have for it.  It wasn't that long ago that African wild dogs were considered vermin, being hunted out to near extinction.  These days, they're one of the most interesting species you can watch while in the African bush and a highly prized sight on safari.  Here's hoping you get to see one on your next African adventure!

If you'd like to support the extremely worthy work being done by the team at the African Wildlife Conservation Fund, please make a donation and help them keep up their important work to conserve this species.  Click on their Donate page here.